on March 04, 2014
It is quite unique that of all the regions in the Philippines, only Bicol has a regional fiesta. This fiesta celebrates the maternal care of Nuestra Senora de Peñafrancia.

Our Lady of Peñafrancia has a long history of devotion. It originated with Simon Vela's search of Peña de Francia, which is a hill near San Martin del Castanar, Spain. When Simon found the hill, the Blessed Virgin Mary carrying Jesus in her arms appeared to him.

During the apparition, Simon got ecstatic and said, "Oh, Lady, the dream of my soul, the inspiration of men and women! My labors are now ended. Many years have I traveled far and wide to seek you and to drink in the beauty of your eyes! Do not forsake me: be my protection."

The Lady answered: "Simon, rejoice! Your constancy will be rewarded. Your dream will be realized. Your labors are now ended. Take heed and keep in your heart what I wish you to do. Dig in this spot and take what you can see and place it on the summit of this rocky hill. Build on this hill a beautiful dwelling. You are to begin it and others will come to finish it. This must come to pass as it has been the wish of my child."

In the morning of May 1434, Simon began digging in the spot where the Blessed Virgin appeared. Then, there was a voice which told him not to do the digging alone. So he went back to the town of San Martin del Castanar and asked five men to help him. His helpers were Anton Fernandez, Pascual Perez, Benito Sanchez, Juan Hernandez and Antonio Sanchez, the parish scribe of the place.

After continuous digging, on May 19, 1434 they were able to find the image of the Blessed Virgin with the Child in her arms.

The devotion to our Lady of Penafrancia came to Naga through the family of a certain Spanish government official from Peñafrancia, Spain. The government official had a son named Miguel Robles de Covarrubias who was a seminarian and seriously ill at that time. Miguel vowed to Our Lady of Peñafrancia that if healed he will construct a chapel on the banks of Pasig River.

Miraculously, Miguel was healed and then he was ordained a priest not in Manila but in Ciudad de Nueva Caceres (now Naga City). To fulfill his vow to Our Lady, he mobilized the natives living along the slopes of Mt. Isarog to construct a chapel along the banks of Bicol River. He also commissioned the artisans to sculpt an image of Our Lady based on the picture he was carrying all along. It was said that during that time, miracles happened here and there, so the news spread quickly and many people believed in Our Lady of Penafrancia.

Currently, the Our Lady of Peñafrancia is enshrined in a minor basilica named in her honor located at Balatas Road in Naga City. It is an exquisite church adorned with the works of art of Pancho Piano, a renowned Bikolano painter. 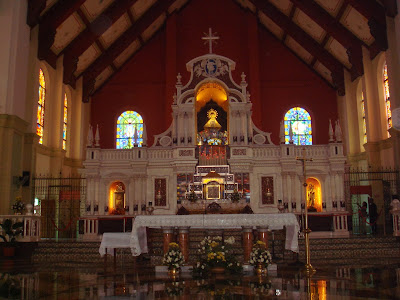 The altar of the Basilica. 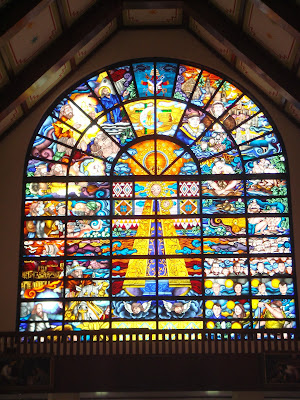 Stained glass in front of the Basilica depicting Bicol's devotion to Ina.


Visiting Our Lady's shrine is among the more meaningful activities when in Naga. In doing so, one will know the deeply entrenched devotion of Bikolanos to their faithful and helpful Mother.